Stop Having A Bad Conscience

This day started a new era in our family.  Unna had her first day at daycare. From now on she’s in part-time daycare, 7 hours, three times a week so that I have more time to work.

I have bad conscience about Unna´s daycare even though Unna herself is really happy about  her possibility to spend more time with children of her age from now on. “Mom is boring. I want other playmates!” , that is what she said to me already last winter.

Because my parents were farmers I´ve been able to grow up at home before I went to school . That´s why I`ve no experience about daycare. That´s why for me it´s just weird that someone else takes care of my child. I feel that I should raise my own children even thought I know that it´s not possible to combine my work and childcare in the same way as it was in a farm.

After Unna´s first daycare day we had homemade berry pie together. Unna was so excited when she told me how nice time she had at daycare. At that very moment I made the decision; I will stop having a bad conscience about things that are good for our family. And Unna´s part-time daycare is! It was a good decision. I know it’s going to be difficult, but I hope it helps me to avoid having a bad conscience in the future a little more often 🙂 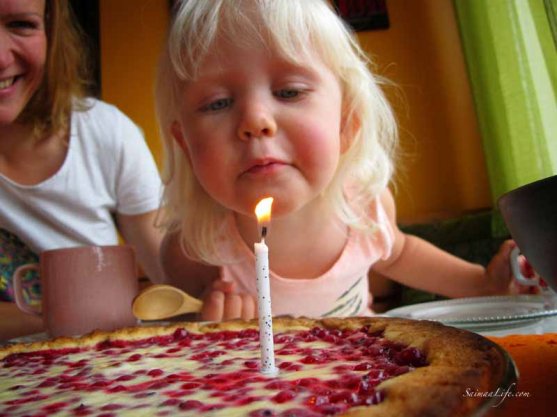 Work For Your Dream Job