If you ask locals to recommend you some summer travel experience in Saimaa, it most probably would be a lake cruise. And if ask Savonlinna recommendation, it would be a Savonlinna city sightseeing cruise. Even we who live here never get tired of the beauty of Olavinlinna castle. City cruise is also the best way to see the personality of my home city; the fact that Savonlinna is built on islands and surrounded by the waters of Saimaa. 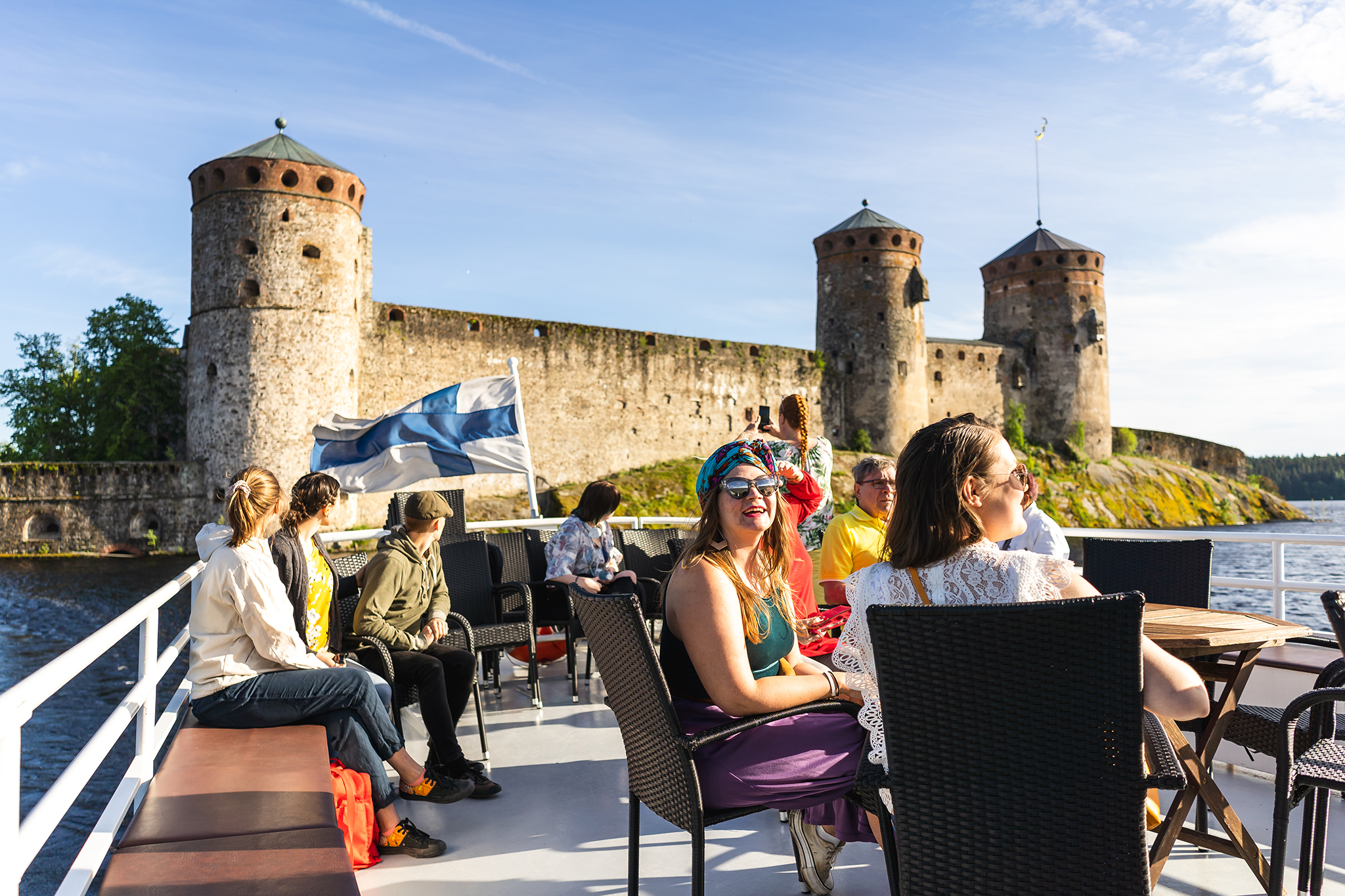 Since 1993 family Kinnunen has taken travelers to the waters of Savonlinna city with their ships m/s Ieva and m/s Elviira that the family’s father has built. Savonlinna city sightseeing cruise is their most popular cruise.

The cruise takes 1 hour and during that m/s Ieva ship takes its cruise travelers around Olavinlinna castle and the islands on which the town of Savonlinna is built. Besides Olavinlinna, during the cruise, you can admire the rocky beaches of Casino Islands, local lakeside homes, and the only year-round inland shipyard in Finland, and Finland’s biggest concrete bridge in Laitaatsalmi.

If you’re lucky, you may spot Saimaa ringed seal -the most endangered seal species in the world- swimming or sunbathing somewhere too!

You can enjoy your Savonlinna city sightseeing cruise both indoors and on the sun deck. There is free WiFi onboard, and also a café/bar where you can buy coffee, tea, beer, cider, sparkling wine, and other refreshment drinks. Small snacks are available for you too.

You can buy the tickets for the real cruise here. 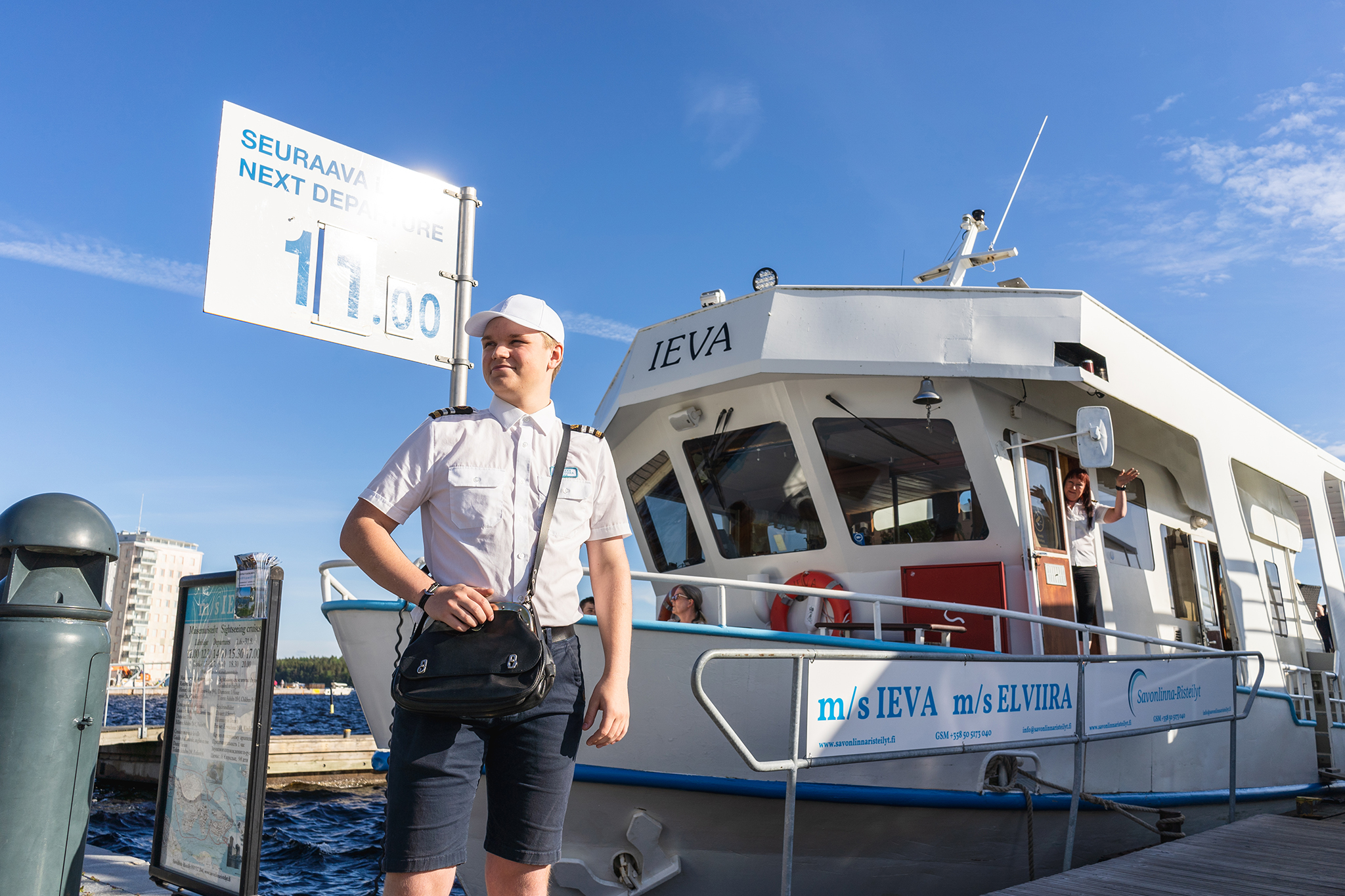 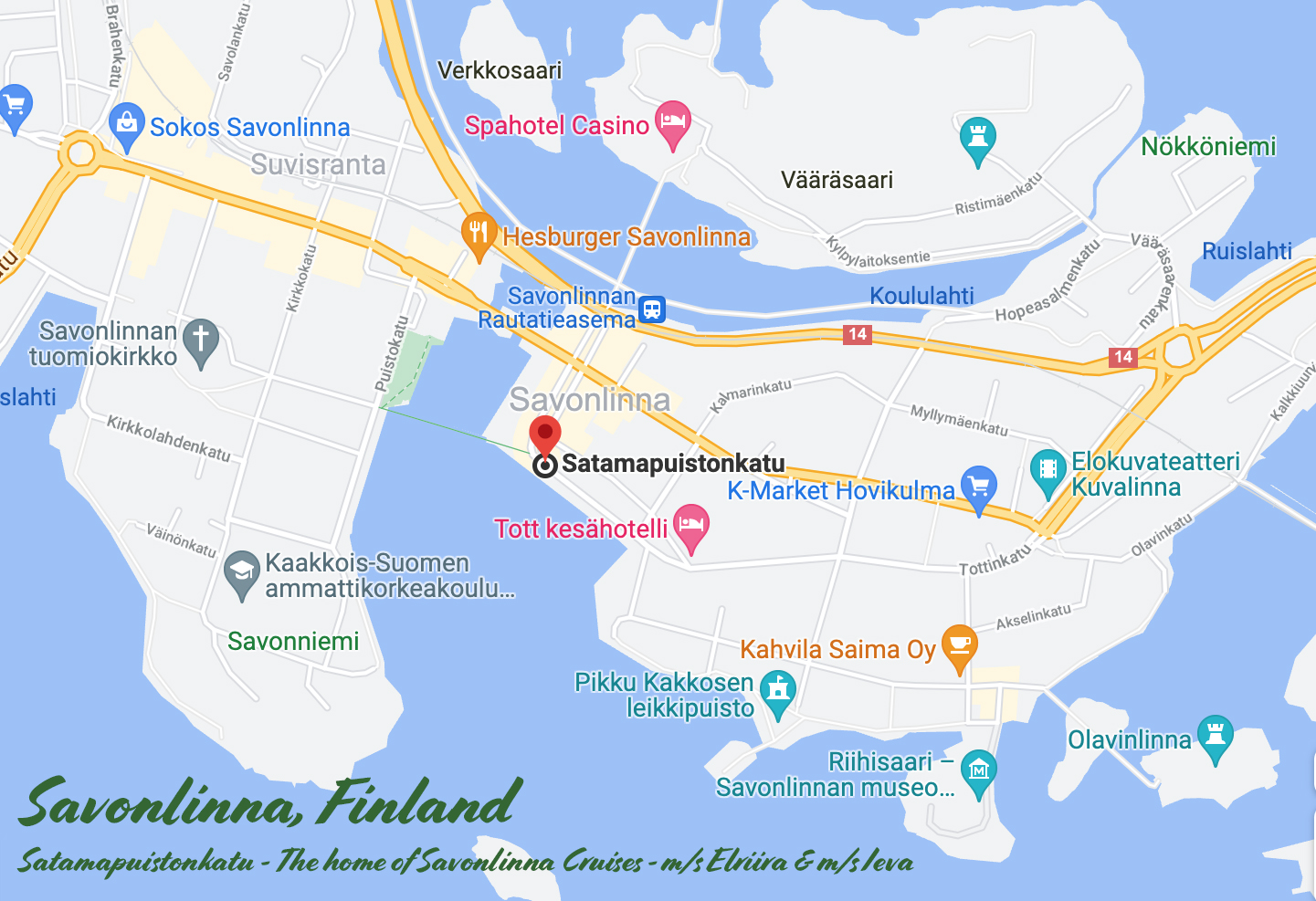 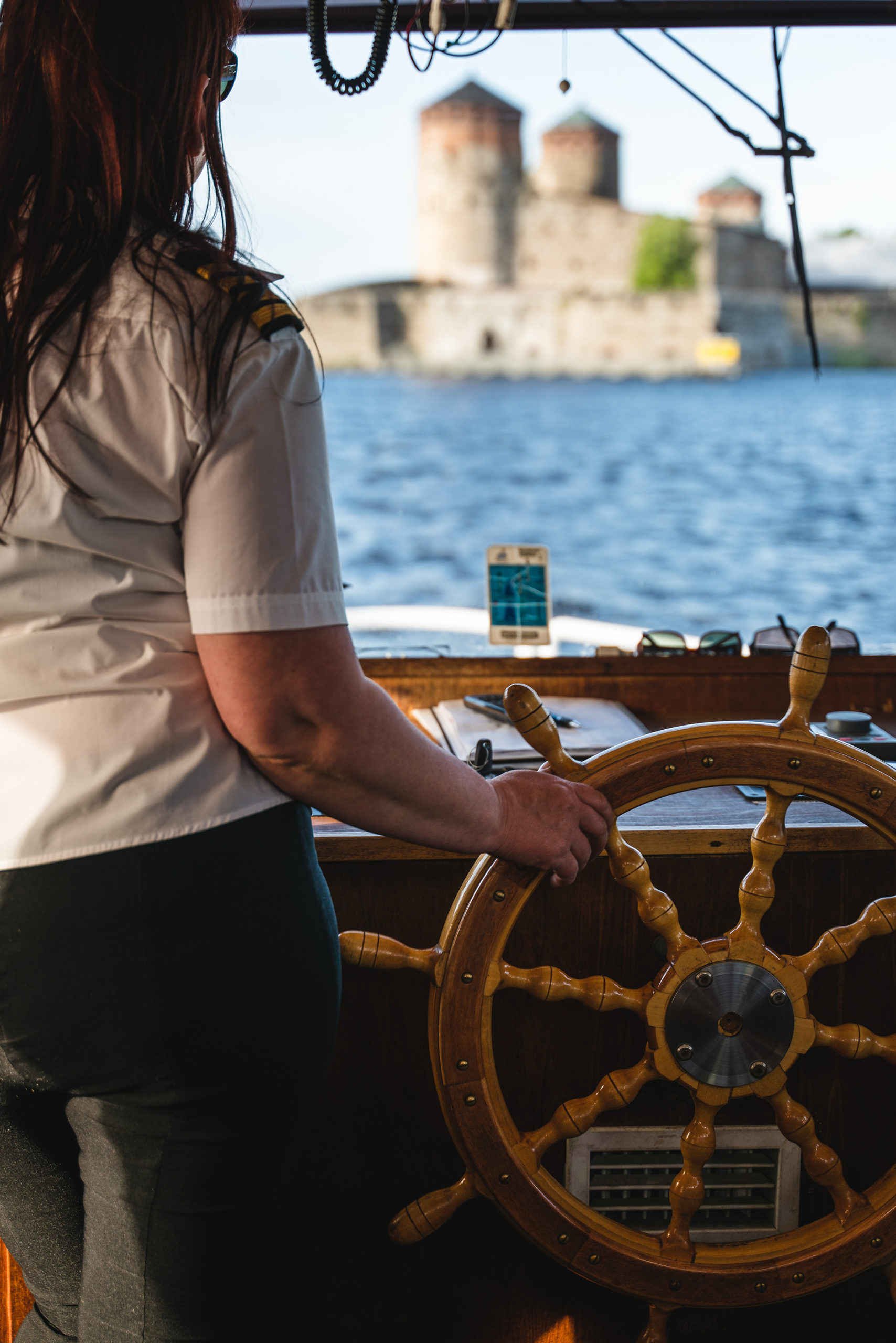 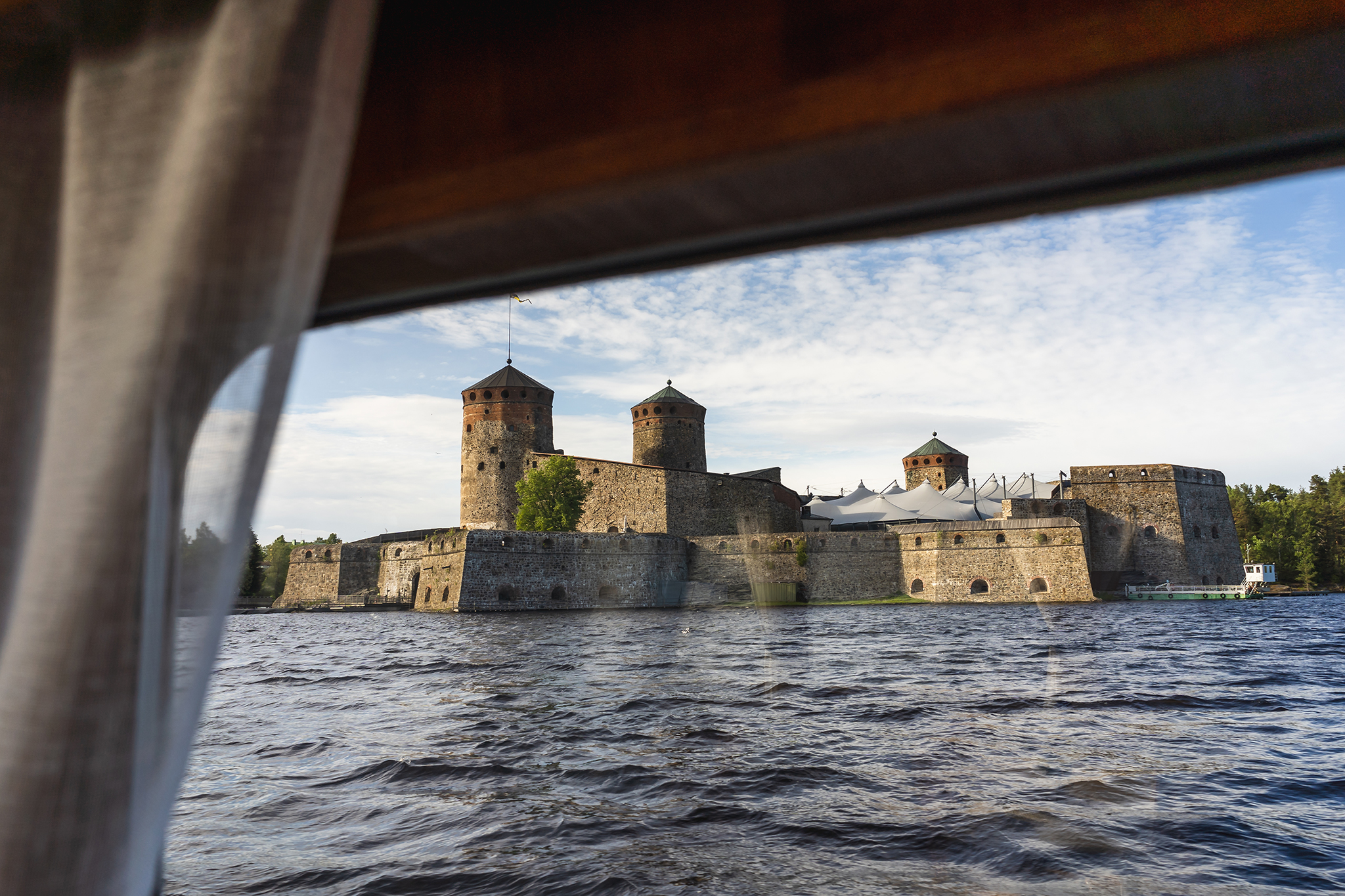 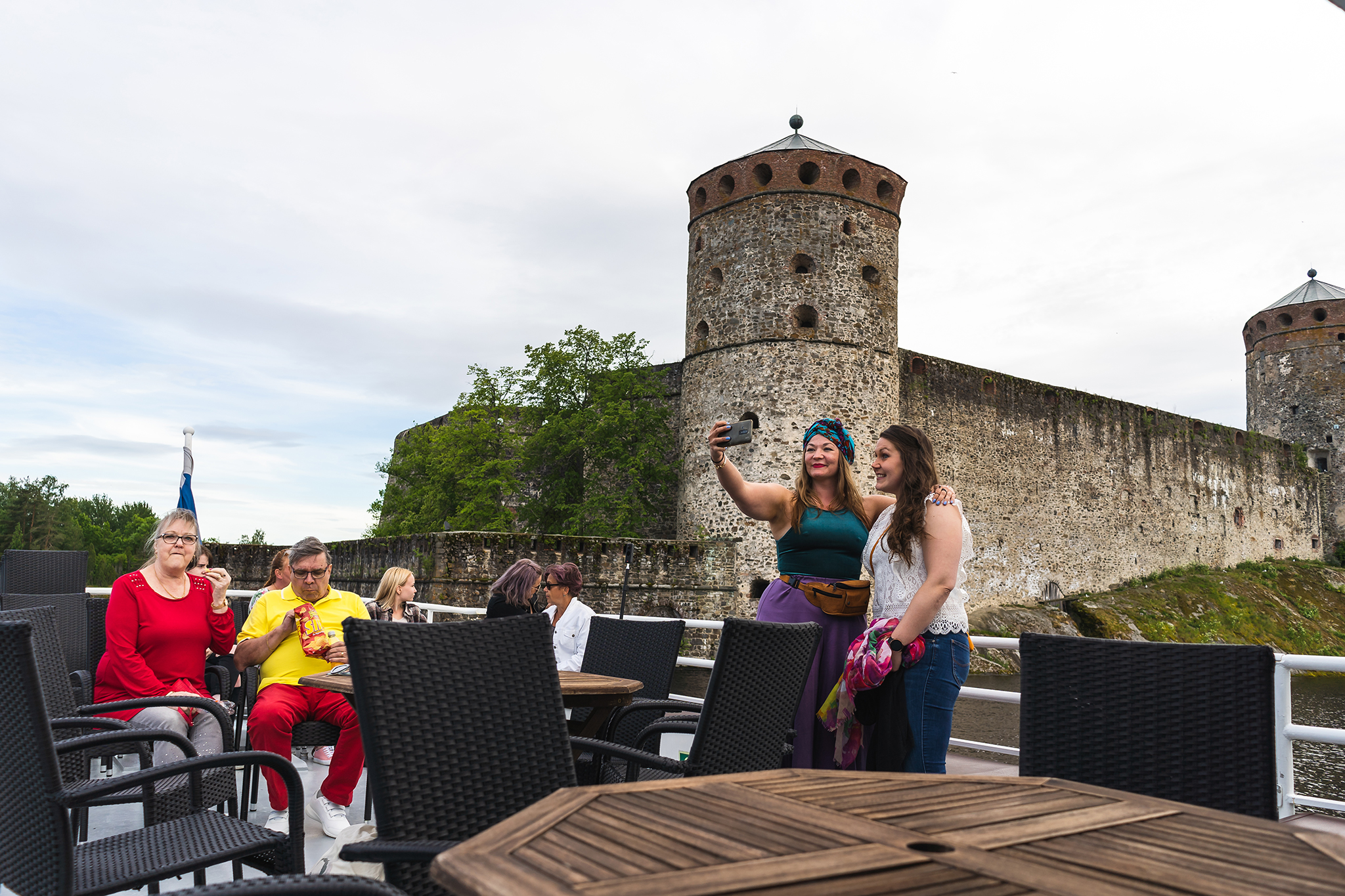 As I said, we locals never get tired of admiring the beauty of our medieval castle Olavinlinna. Also, Piia Kinnunen, the captain of Savonlinna Cruises, has said it and she goes around the castle in summer 5-8 times per day!

If you ask me, I think Olavinlinna castle is the most beautiful castle in the world. It is built on the island and surrounded with amazing Saimaa lake nature. And the castle looks the most magnificent when seen from the waters!

The building of Olavinlinna Castle began in 1475. The Danish-born founder of the castle, knight Erik Axelsson Tott, decided that a powerful fortification should be built to protect the strategically important Savo region. The castle was to repel Russian attacks from the east and to guarantee the control of the Savo region for the Swedish Crown.

Nowadays the world-famous Savonlinna Opera Festival is held in the castle every July. Olavinlinna Castle is the northernmost medieval castle in the world that is still standing. 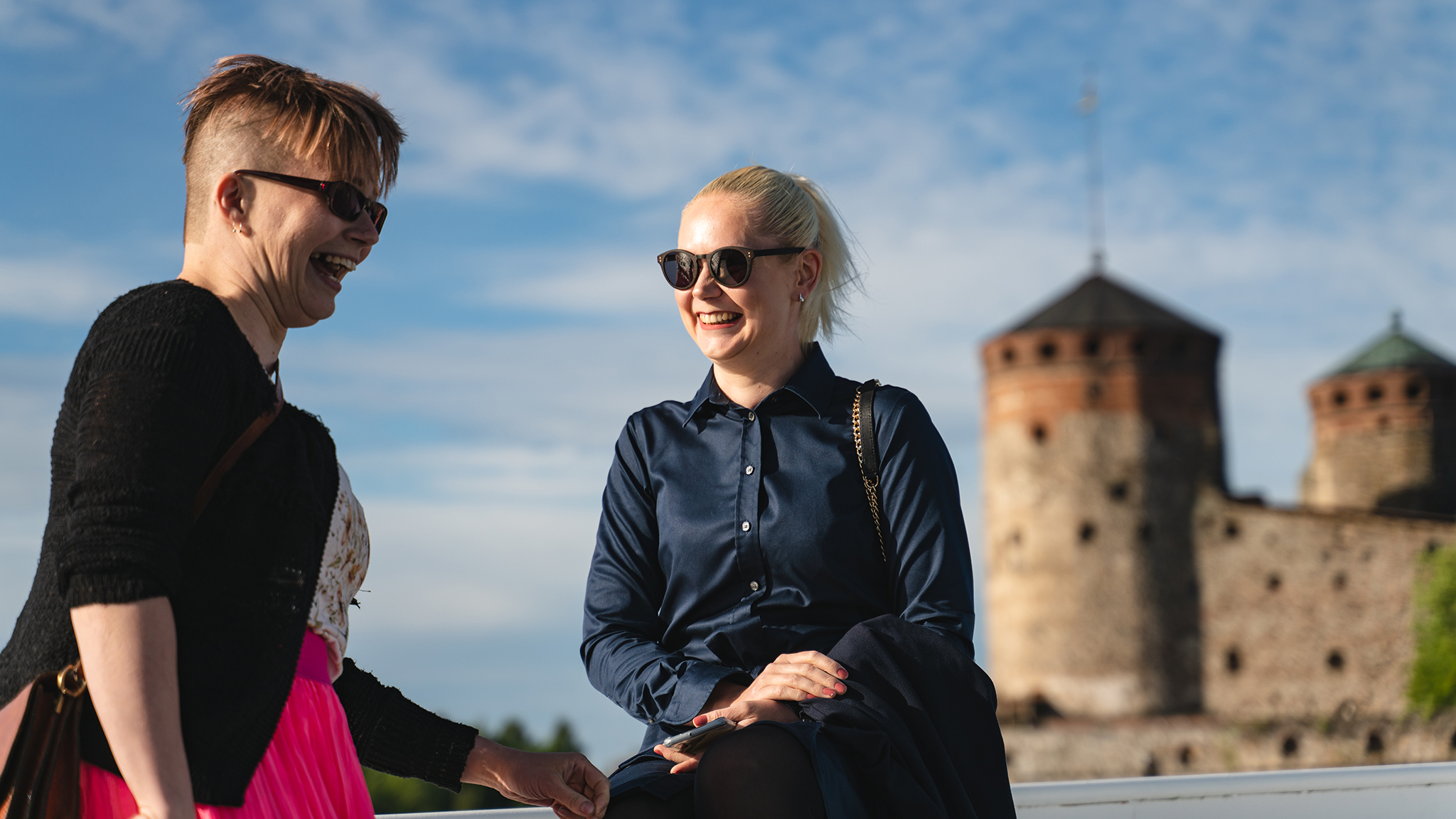 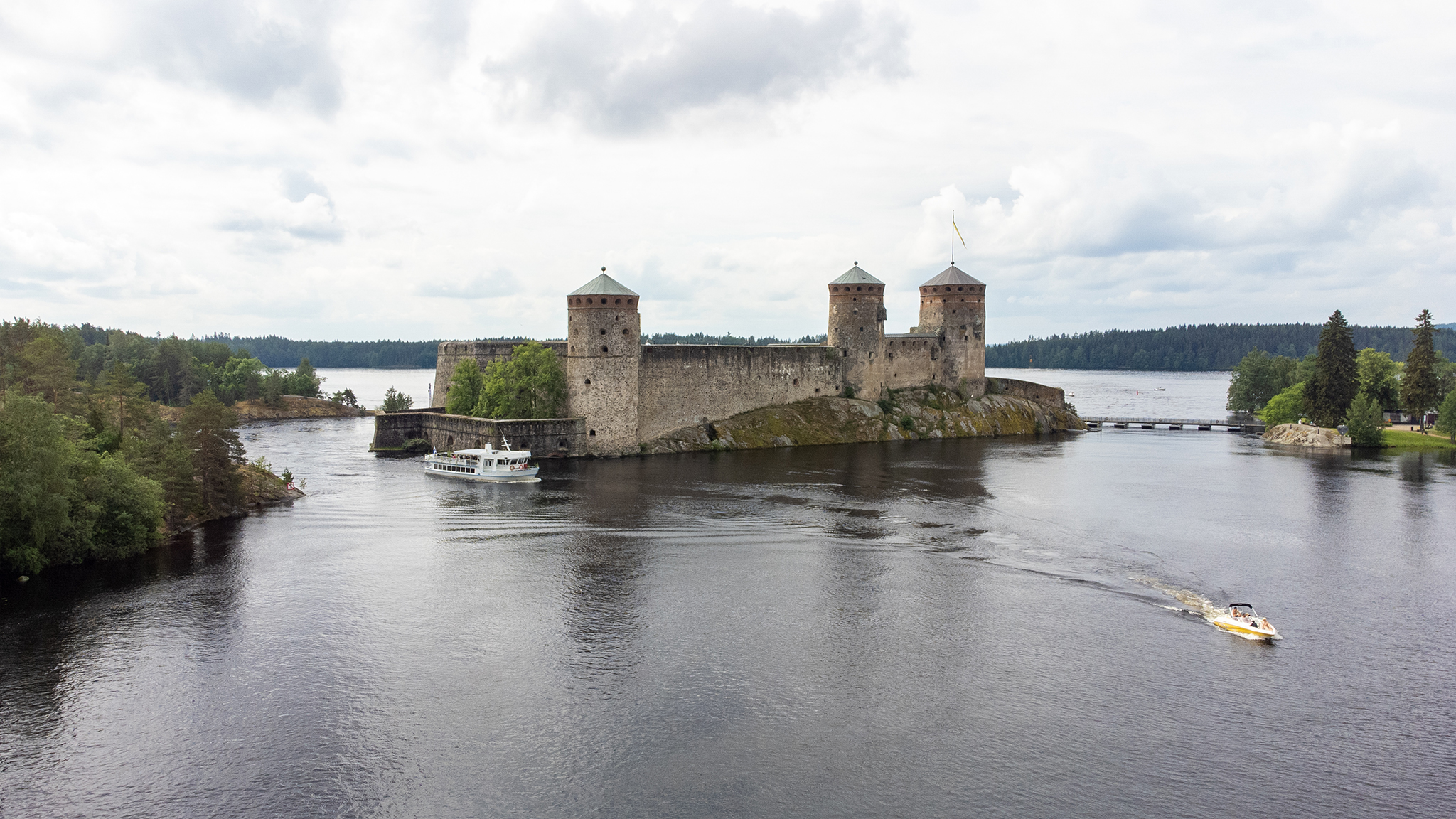 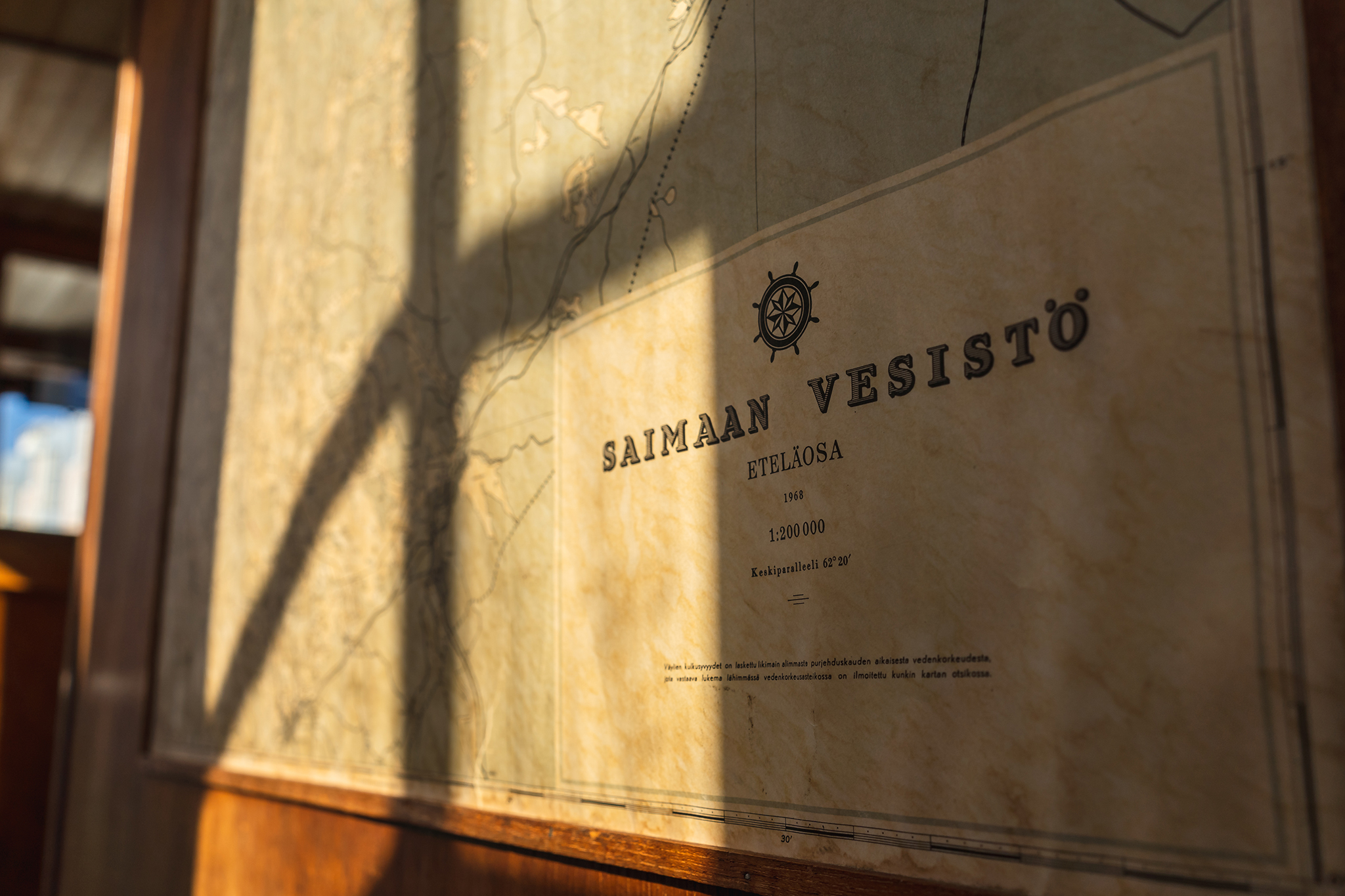 Savonlinna is built on islands nestled by Olavinlinna castle and Lake Saimaa. The city itself started gaining form slowly towards the end of 1400. When the castle building project was going on, the area got a lot of people who worked in the castle. As the community stabilized, in the year 1639 Pietari Brahe founded the city of Savonlinna.

Savonlinna is an idyllic small town with only about 32 000 inhabitants. You find a lot of greenness both inside and outside of the city as well as views of the blue waters. 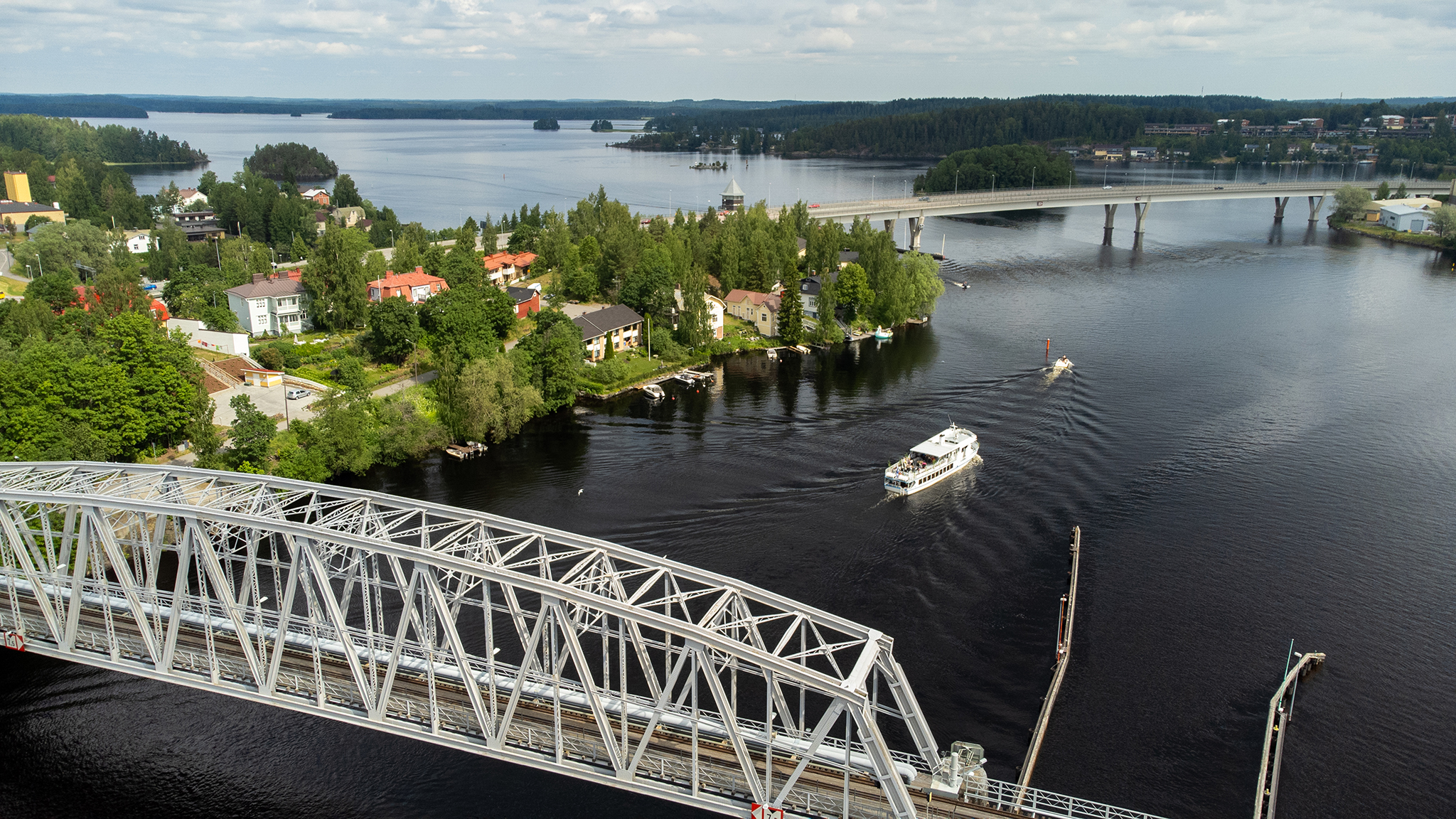 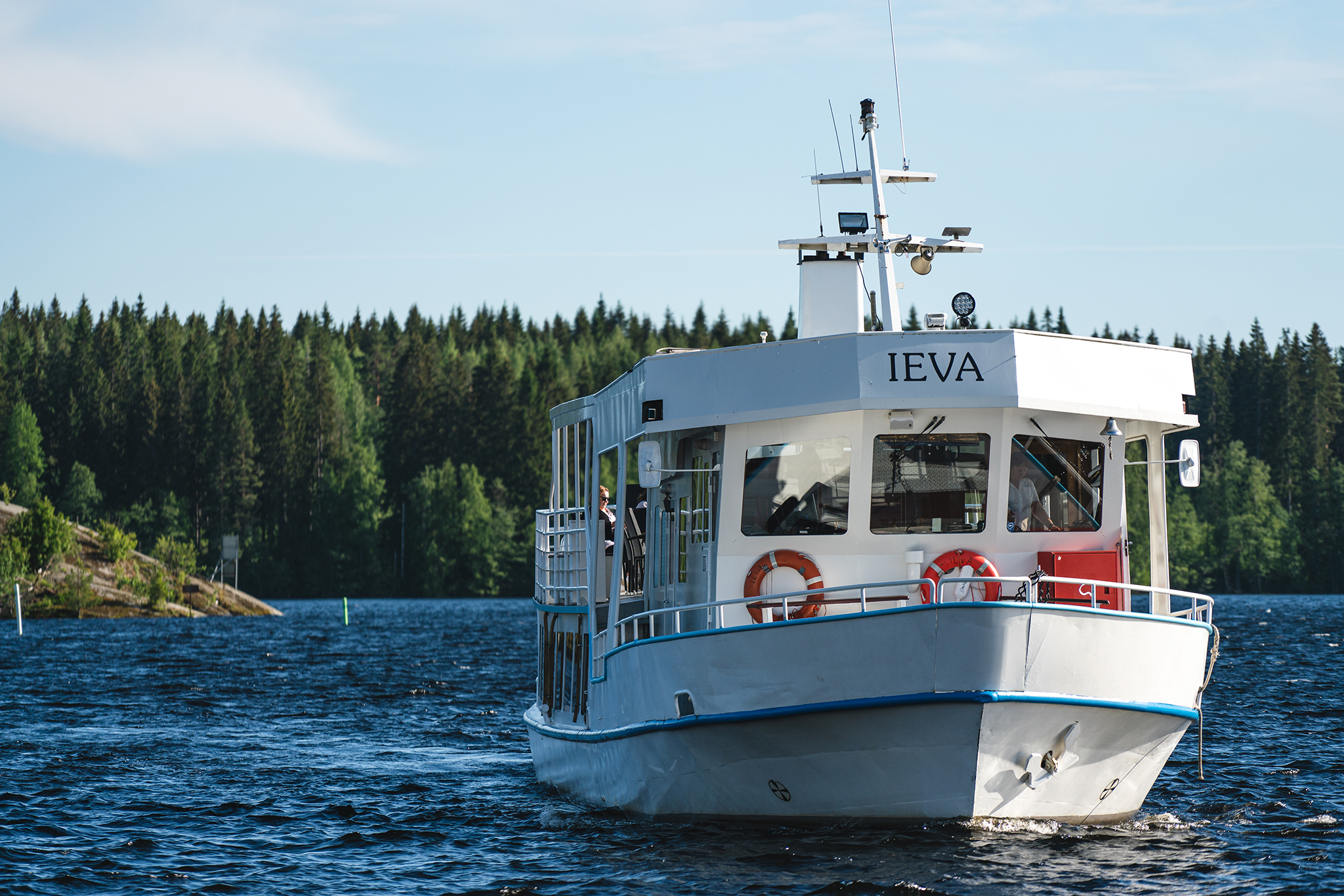 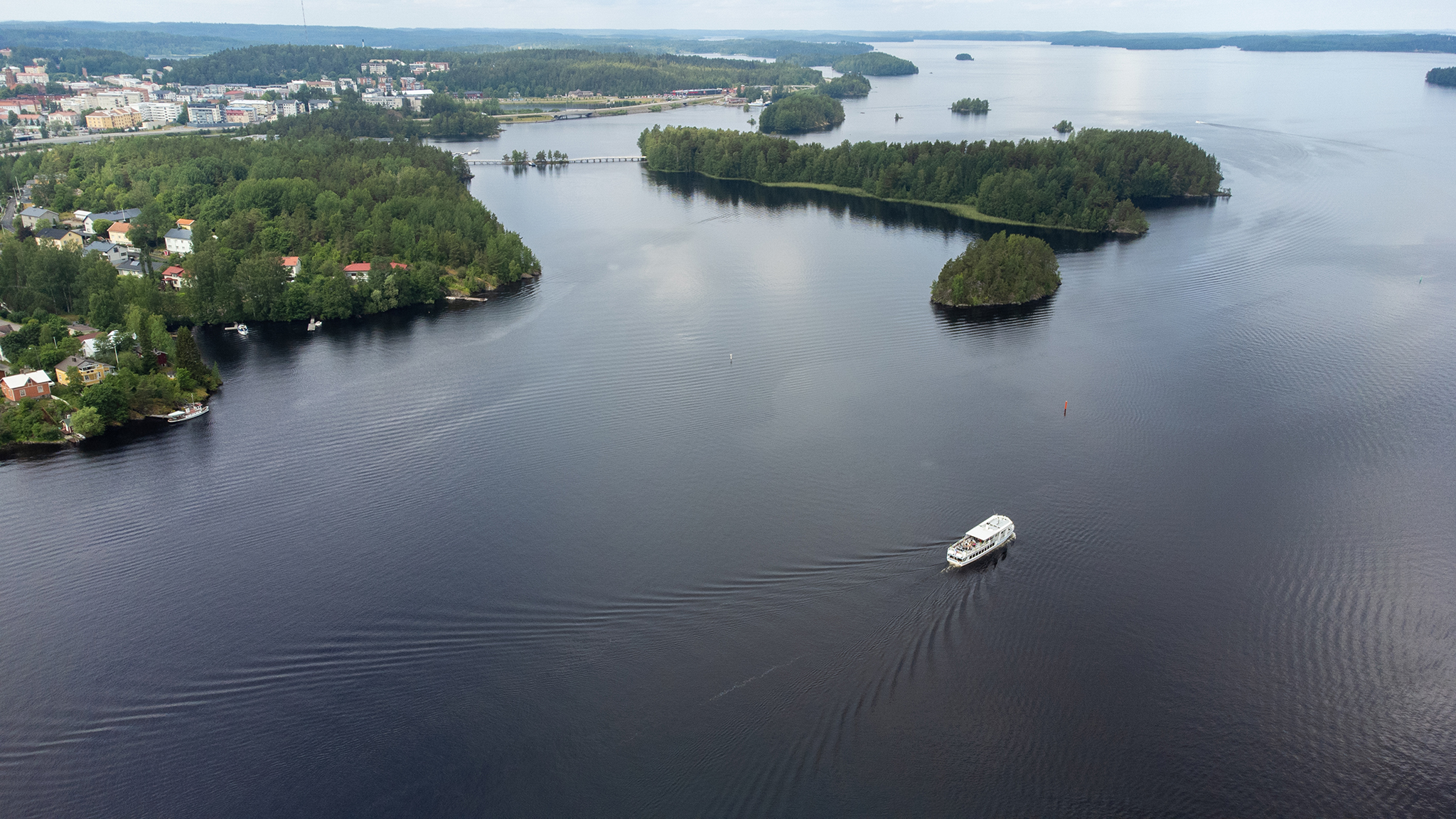 Sulosaari island is the biggest island in front of the cruise ship here.

During the Savonlinna city sightseeing cruise, it is also easy to see how green and blue are really the colors of Savonlinna and how plenty there is nature everywhere. During the cruise, you pass for example  Sulosaari island that is a popular recreation island for the locals and easily reached because of its bridge. I recommend walking around Sulosaari island before or after your cruise. There is also a popular and cozy crêpe-café Kalliolinna open on the island during the summertime. You find a sandy walking path to the bridge of Sulosaari from the side of the parking place of Casino island. 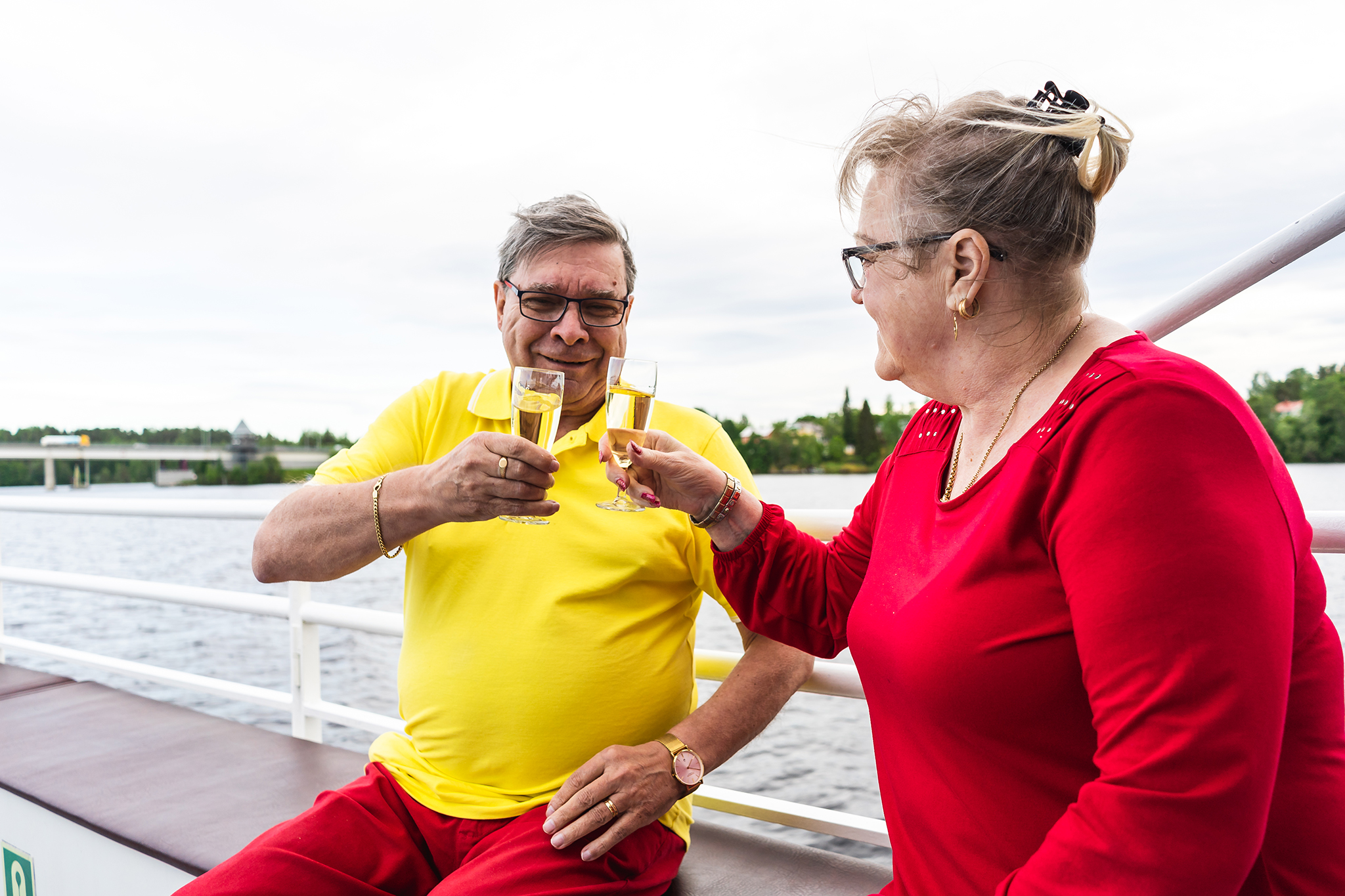 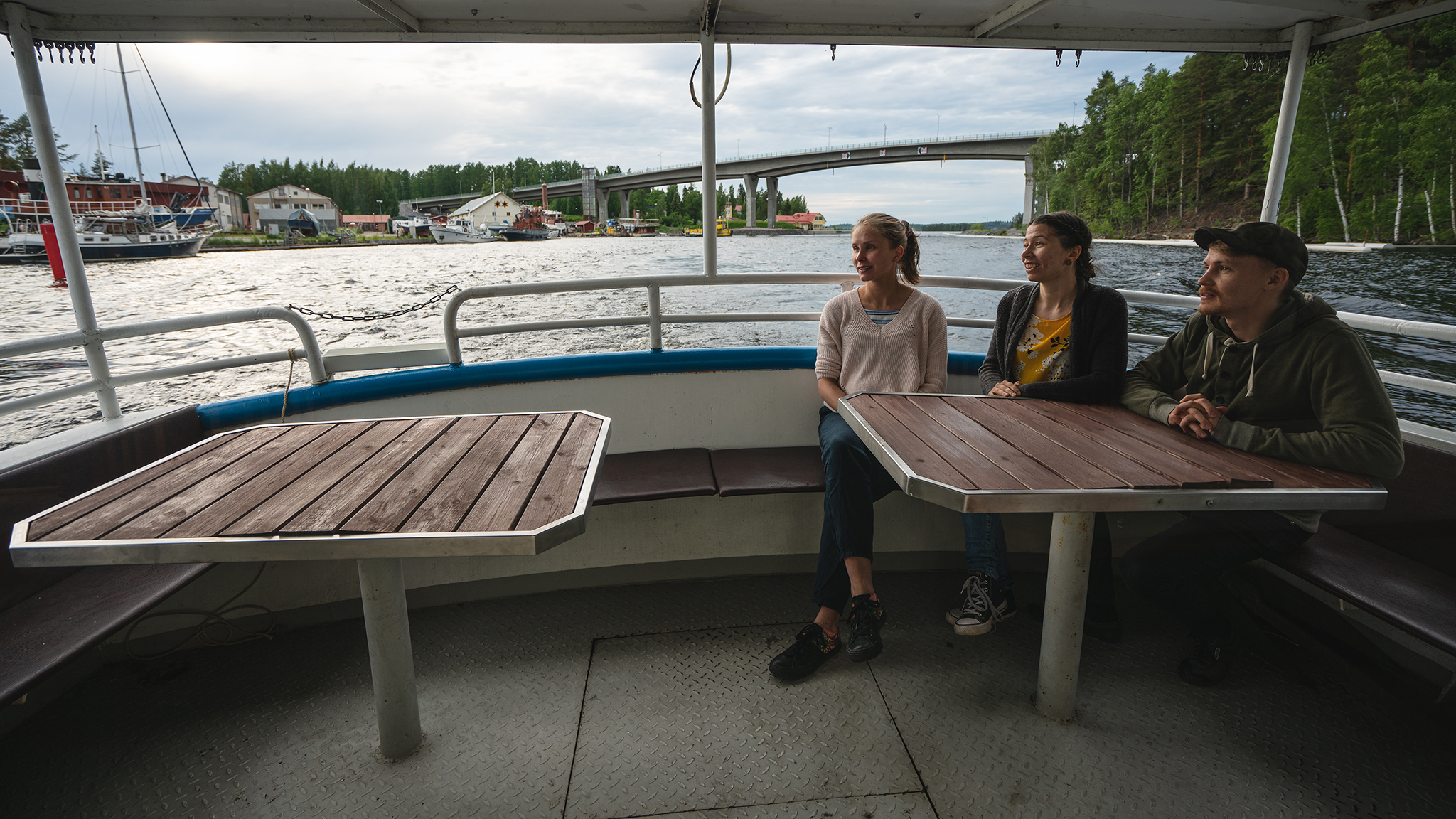 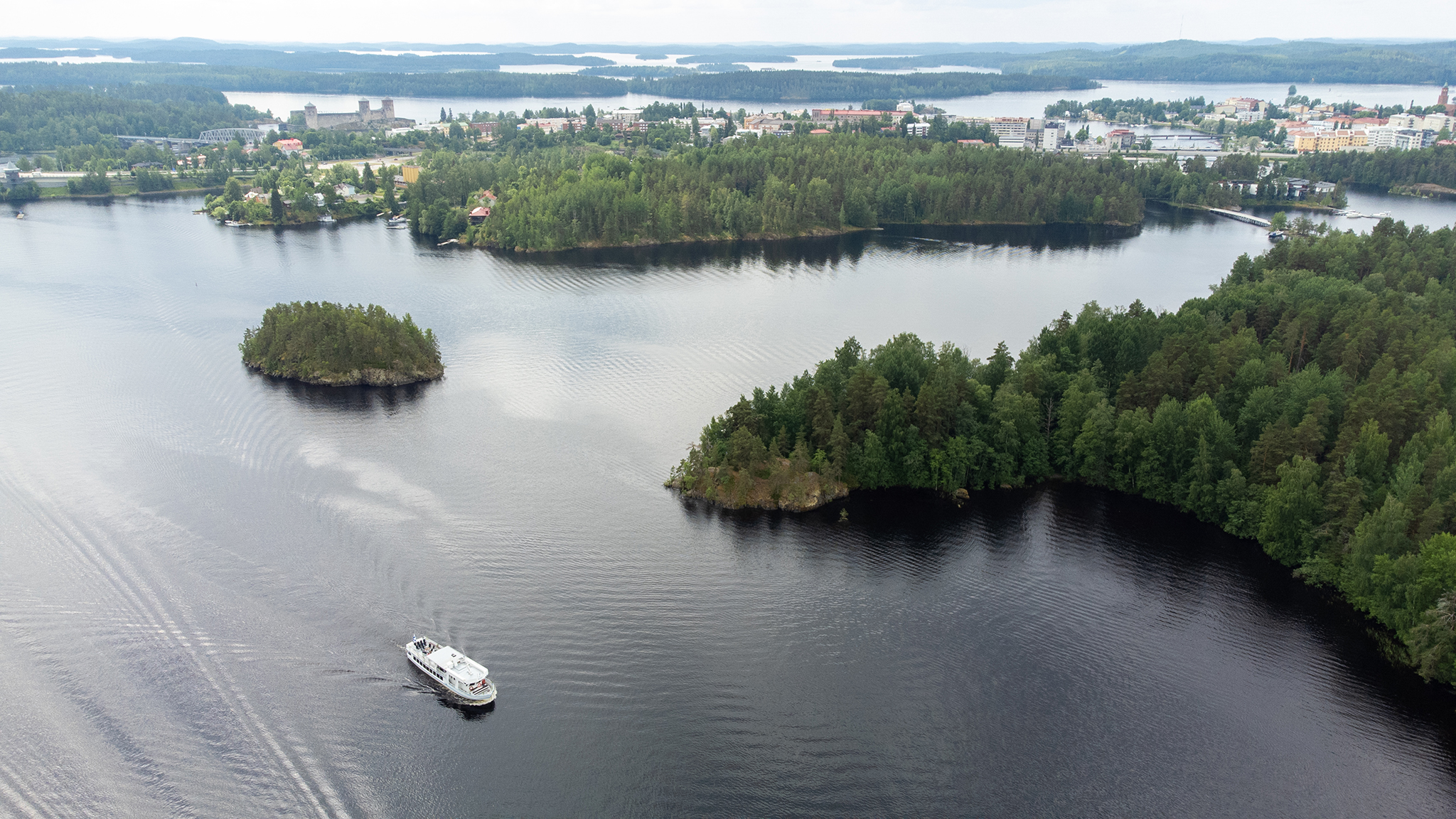 360° Virtual Savonlinna City Sightseeing Cruise is now available for you 24/7!

Nothing beats the real things and the same applies to cruises. That’s why we want to invite you to visit Savonlinna for real!

However, before you can do that, there is also a way for you to experience the Savonlinna city sightseeing cruise and get inspiration for your Saimaa holiday from your home. It is possible because captain Piia and her crew have now made also a virtual cruise available for you!

Here’s 1-minute sneak peek of it to watch. The video is 360° so roll the screen with your fingertips while watching it to see everything:

You can buy the 360° virtual cruise by clicking:

With love from Saimaa,

Mari and the Captain Piia & her crew

We recommend also for you to read:

“Welcome to Lake Cruise to Savonlinna Archipelago – Virtually of for Real”