A beginning of fishing widow friendship

I got a great Valentine´s day gift today; my dear friend Netta came to visit Savonlinna and we met at the café. 🙂

In the future Netta will also start as my guest writer. That´s why I think that this is a right day to tell a story about our friendship… 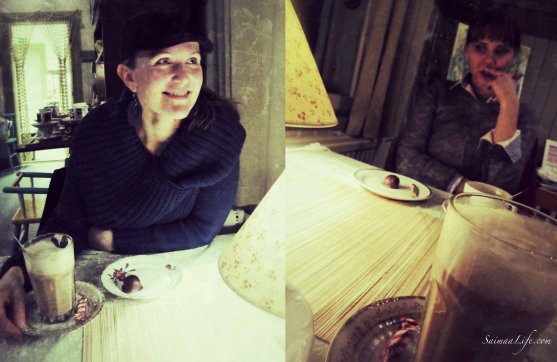 If someone had asked me about Netta four years ago, I`d have answered that ”Netta is just a friend”. Nowadays -as I wrote in the beginning of this post- I´d say that ”Netta is my dear friend”. During these four years our friendship has grown a lot.

It was a winter evening. Netta and her spouse had travelled from Helsinki to spend a holiday in Savonlinna. Last time I had seen Netta six months before and next I would probably see her in six months. We had met each other only with the company of our spouses. The reason for that was that our spouses were childhood friends. So frankly I was kind of semi-forced to get acquainted with Netta! However, every time when we had met I had enjoyed her company and noticed that we had a lot to talk about. So I liked Netta even though I didn`t actually know her that well.

We were spending an evening together because our men wanted to have sauna and talk men stuff. In their case talking men stuff meant talking about fishing. Fishing had become a hobby number one for both of our men. And what would be a better way to spend the evening than comparing fishing experiences and having sauna, when at the same time their women would make a evening snack for them…

So our men were having sauna and I was in the kitchen with Netta. We had plenty of time to talk cause it always took a LONG time for our men to have sauna. Because we were introduced to each other by our men we started to talk, surprise surprise, about them!

I didn’t know how Netta was feeling about her man’s fishing hobby. Still I decided to tell her how irritated I felt the day before because Henri’s fishing took so much of our quality time. At the breakfast table Henri had talked about fishing on the phone with his friend and when we were finally having an evening snack he had talked about same thing with the other friend!

Netta laughed when she heard my story and said that she had had several similar days with her man. And she had also been irritated by those kind of days.

Then I got it. Netta understood me. She really understood all of those strong emotions and small details that affected a woman whose man was a passionate fisherman. I realized that we were combined by one thing – being fishing widows. We both knew what good and bad was related to being a fishing widow. After that night I didn’t think her “just a friend”. One big thing in common had made us good friends. And in the core of our friendship was a life as a fisherman spouse.

So today Netta is my dear friend. After that evening we next met just with two of us. And yes, we still talked about our men and their fishing hobby. But it didn’t take long when our conversation turned to other things, more feminine ones. We found out that we had other things in common too, like blogging.

Until now Netta has been writing a blog of her own. It’s called “Syyskuun kuudes”. She’s been writing it in Finnish. Now she has decided to quit it and start writing for my blog. I’m so happy and excited about it!

I know that one thing she will be writing about is interior. Let see what other things will inspire Netta in the future 😉

Work Out Your Upper Body By Shoveling Snow